What is the Law of Spousal Privilege?

While listening to “Stand By Your Man,” you may soon start thinking of questions. Most importantly, is asking what is the law of spousal privilege?

Society has often felt the strain of doing what’s right and what helps their spouse. Unfortunately, there is a fine line between your duties to your home and abetting criminals. While it may seem confusing at first, understanding the law of spousal privilege gets easier.

Learn more from us at Blackman Bail Bonds, your trusted source for 24-hour Pennsylvania agents.

What is Spousal Privilege? 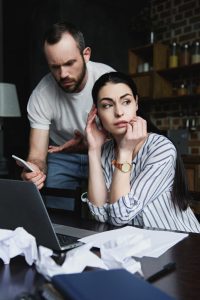 Much like doctor-patient confidentiality, spouses may find themselves in positions where they can’t come forward. If what was said was mentioned in confidence, the law believes it should be protected. However, this only applies to communication made from one spouse to the other. If one individual physically witnesses a crime taking place, they must report it.

Another stipulation is that spousal privilege becomes null when other people also hear the communication. When plans are discussed in public and other patrons hear, they can also report it.

You can only offer so much protection when your spouse decides to break the law. Make sure you don’t become an accessory and be sure to defend yourself as well.

Where Does Spousal Privilege End?

What happens if one spouse literally sees blood on their spouse’s hands? Or if they walk in on them in the process of assaulting someone?

Unfortunately, spousal privilege only extends to communication, and they may still need to testify. Protection for your wife or husband, as well as their legal obligations, is information-based.

The less that they know, the better the odds are that they can avoid testifying. They may also choose to take the stand to keep themselves from getting charged as an accessory. If spouses have already started a divorce, they may be able to avoid appearing in court. In other instances, if someone is facing charges of fraud, they may be forced to testify.

Why Does Spousal Privilege Exist?

At first, it seems odd that the law would actually prevent a witness from testifying. You might be surprised to learn that spousal privilege has been granted for nearly one hundred years.

Following the Roaring ’20s came the Great Depression and emboldened organized mafia rings. As a result, the FBI was formerly established to counteract surging crime rates. Although government agents had already existed in some capacity, the then G-Men were launched under Hoover. As more people turned to crime, just as many families became punished as well.

As a compromise, Wolfle v. United States established the precedent that marriages must remain protected. In 1934 spousal privilege was then granted in exchange for those impacted by crime themselves.

Are You or Your Spouse in Jail?

Spousal privilege only works under the right circumstances, and you may still be detained today. However, that doesn’t mean you must stay behind bars until your trial. You can call on us 24-hours of every day for agents throughout Pennsylvania. Choose Blackman Bail Bonds for service to any holding facilities.