What is Mistaken Identity

We’ve all seen the crime show trope with an arrest being made by an officer with an eye witness. But the person being arrested isn’t the person who did the crime; they just look alike. This isn’t a common occurrence, but crime shows are usually based on real cases. There have also been legitimate cases of mistaken identity in the court system.

What Does Mistaken Identity Mean?

The literal definition of mistaken identity is when someone believes you to be someone you’re not. When this happens in a legal situation, you may be arrested or questioned for a crime that you did not commit.

How Does Mistaken Identity Occur?

Human memories are not terribly adept at remembering full detail when we are under stress. According to the Innocence Project and an article published in Time, up to 41% of eyewitnesses make an incorrect identification when shown a lineup. This leads to 71% of all wrongful convictions ending up as mistaken identity cases.

With human memory’s fallibility, many factors can lead to misidentifying you as the suspect in a crime.

Many people will misidentify a person’s race through true mistake or unconscious racial profiling. Because of this, some people don’t know the difference between some races and can misreport details related.

If lighting is low or visibility is hindered, a situation’s details will fill in and solidify into an inaccurate memory for the witness. Therefore, it’s possible for the memories to be recited incorrectly due to issues with visibility. 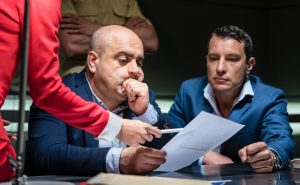 Protecting witnesses is critical to their continued safety. However, much of our memory is created through other sensory inputs. Therefore, simply looking at a series of photos, or a lineup of suspects through a one-way mirror doesn’t lend itself to accurate recollection.

We’ve already discussed the human mind’s inability to accurately recall memories through trauma. Further, putting a defendant in a jumpsuit and shackles can cement that person’s image into that role. And that’s even if they’re not the ones who committed the crime.

What Can You Do in a Case of Mistaken Identity?

The first thing you should do when you believe you’ve been arrested or convicted in a case of mistaken identity is to seek legal counsel. Hire an attorney or work with the court-appointed lawyer on the case.

Your lawyer may request a DNA test or other investigative tools and techniques to help remove you from the suspect pool. The prosecution has the burden of proof for allegations. If your attorney looks at the evidence and deems that the burden of proof hasn’t been achieved, you’re likely able to create a solid defense.

How Can a Bail Bonds Agency Help Me?

There are just some situations that are more efficient when you can resolve them yourself. One of those situations is chasing down evidence that can relieve you of suspicion. Your attorney can advise you on the best way to solidify your case of mistaken identity and help you find resources to help.

Blackman Bail Bonds is here to help you get you out of jail and on the path to maintaining your freedom. You can read more about the process in our blogs and find out more about the criminal justice system.

Have your family or your lawyer coordinate with our team 24 hours a day, 7 days a week, 365 days a year. We’re here to help you stay out of jail.