What is Failure to Report a Crime?

Although hip-hop has popularized “snitches get stitches,” not everyone knows the consequences of staying quiet. Many people find out firsthand what failure to report a crime is all about.

You may think you are doing your friends or family a favor by not talking. Unfortunately, you only put yourself at risk for prison and fines as well. Before you take a vow of silence, consider what Blackman Bail Bonds has to say. As your trusted name in bail bond agents, you can reach us 24-hours a day.

What Happens With Failure to Report a Crime?

Unlike other laws, “failure to report a crime” is relatively straightforward. A person witnesses illegal activity, and they chose not to come forward. 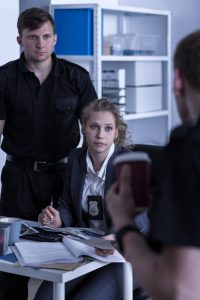 While some may see this as a victimless crime, it’s anything but. Seeing someone mug others, assault them, or worse keeps the community at large in danger. If you are intentionally trying to cover up illegal actions, you are now their accessory. The severity of your crime depends mostly on how severe what you witnessed was.

While directly witnessing a crime isn’t itself illegal, failing to report it is. Federally, you can see fines and up to three years behind bars for not speaking up.

Is Being a Witness Illegal When Crimes are Involved?

It isn’t enough for the state to discover that you saw a crime take place. What the courts look for is what happened after you saw the interaction.

First, they will determine that you did see the entire crime happen. Then, prosecutors will learn whether the witness understood that the law was broken. Next, they will prove that, after knowing what happened, you still didn’t come forward. Finally, courts will discuss how you didn’t just ignore the crime but covered it up.

In the end, if you see something happen, you should always report it. Do your part to keep the community safe and inform law enforcement after witnessing crimes.

What About My Fifth Amendment Rights?

One reason to not inform authorities of illegal activity is fear of self-incrimination. By exercising your Fifth Amendment rights, you can possibly circumvent jail time. When a witness is reasonably sure that they could also be arrested, they remain silent. However, this defense only works when you are honest with the authorities.

For example, Jennifer Weekly became a surprise getaway driver when her husband robbed a bank. However, she called to tip off her mother-in-law, rather than the authorities. As a result, she was charged as more revelations came to light. Weekly had actually participated in planning the robbery and cut his hair that morning.

Have You Failed to Report a Crime in Pennsylvania?

Many people see themselves in a sticky situation when friends or loved ones commit crimes. Unfortunately, when you don’t report these actions, you can also be arrested.

If you find yourself in a situation, know that you can contact us at Blackman Bail Bonds 24-hours of every day. Contact us whenever you need instant access to our convenient bail bond agents.