What Happens When You Take a Plea Deal

You’ve been arrested, and you’re about to start the trial process. Your lawyer mentions a possibility of a plea deal or plea bargain. What exactly is that? What happens when you take a plea deal?

Blackman Bail Bonds is here to discuss the process and options to consider for a plea deal. Read on for more information about this topic.

What is a Plea Deal?

After your arrest, the District Attorney will file charges against you. Depending on the charge, you may spend time in jail waiting for your arraignment, or you may be booked and released.

After you’ve been booked, you need to find a lawyer to help you through the arraignment and trial process. However, most cases are wrapped before they see the trial through the plea bargain process. Your lawyer will work with you and the prosecution to come to a set of acceptable terms to close the case without going to trial.

Oftentimes, you’ll be given the option to plead guilty to a lesser charge and a reduced sentence to avoid going to trial. However, you’ll also find that by accepting a plea deal, you’re stripped of some of the rights given in a full trial proceeding.

What’s at Stake with a Plea Deal?

With a plea deal, you’ll be given the option to plead guilty or no contest. If you go through a trial of your peers, your case could take months, even years, to finally close. You may also be incarcerated the entire time you’re going through the trial proceedings. When you accept a plea deal, you set aside some of your rights to speed up the process. 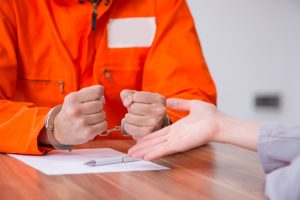 Some of those things you may be giving up are:

In some cases, accepting a plea bargain will net you less jail time, or even early release. Depending on your crime, it could also result in a lifetime position on the national sex offender registry. You’re faced with choosing the lesser of two evils. Battling it out in court, or resignation to minor crime.

What Happens When You Take a Plea Deal?

After discussing and hashing out details with the prosecution, and finding a middle ground, both legal parties can agree that your attorney will present the bargain to the judge. The judge usually trusts the experience and negotiations of the DA and the Defense attorney but can overrule some aspects if they feel it isn’t quite right.

The judge needs to make sure that you’re taking the deal under your cognizance. It’s crucial that you aren’t being coerced into the plea deal.

The judge will read off a checklist to ensure you haven’t been forced or tricked into the plea.

Some of those items on the checklist are:

If sentencing is likely to occur at another time, the judge will give the sentencing date and a summary of the defendant’s next steps for the pre-sentencing report.

How Can You Prepare for the Process?

If you’re currently incarcerated, you’ll need to contact your lawyer right away. The best way to ensure you’re working on a schedule dictated by you and not by the jail is to get out of jail.

Blackman Bail Bonds can help you with that task. You can read more about the process on our blog. Give us a call, or have your lawyer coordinate with our team to get you home during the court process.