On What Grounds Can a Case be Dismissed?

It’s rare, but not unheard of, to have a case dismissed and all charges dropped. There are many hoops to get through to prove your innocence and have the case dropped. With a reasonable defense attorney, it can happen. That poses the question, “On what grounds can a case be dismissed?”

Blackman Bail Bonds wants to help you understand the answers to this question and help you get where you need to be.

What Does it Mean to Have a Case Dismissed?

When a case goes to trial, and it’s found to be lacking in some critical aspect, you can request to have your charge dismissed. If the judge and prosecution agree to this, your charges are dropped, and then you aren’t held accountable for the actions that led to your arrest.

There are specific grounds on which you can ask the court to drop the case and remove it from your file. Therefore, it won’t be recorded on your criminal record or reflect poorly on future housing or work applications. The following examples are the primary causes for dropped cases but are not a definitive list:

Lack of Probable Cause for Arrest 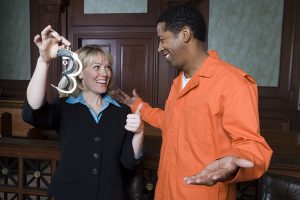 Probable cause is essential when making an arrest. There has to be evidence that the person being arrested is the person that committed the crime. An officer can’t arrest or even pull someone over on a “gut feeling” or “intuition.” They have to have a witness, surveillance, or other information that points in your direction before an arrest can be made. If that probable cause isn’t solidly there, you can request that the case be dismissed.

An Officer Made a Mistake on the Charging Documents

An officer files charging documents and citations under oath, attesting to their accuracy. If a mistake is found and the officer cannot edit the documents in person and under the supervision of a judge or other authority, the prosecution may be forced to dismiss the case. Also, if the document has been tampered with, the case can be dropped as well.

Officers must have probable cause to pull you over, and search a vehicle, or enter a home to search. If appropriate processes aren’t followed, they can be liable for illegal search and seizure. Anything they pulled in their illegal search is inadmissible in court and can lead to your case being dismissed.

Police should only search your person or property after an arrest, or if they have reason to believe you’re carrying a deadly weapon or have a court-ordered warrant. Without checking those boxes, they have no right to search without your permission.

Insufficient or Unreliable Evidence or Witness

If the evidence in a case doesn’t quite add up or a witness is deemed unreliable, a case can be thrown out. There needs to be enough evidence and testimony to prove your guilt beyond a shadow of a doubt. For that, the prosecution will need to obtain incredibly reliable witnesses and strong infallible evidence to present to the court.

The prosecuting attorney may choose not to follow through with charges after reviewing the evidence and testimonies available. It doesn’t happen often, but dropping a case before the trial can occur if things aren’t strong enough for the prosecution’s effort or time.

Additional Reasons For Dismissal Could Include:

Whether you need to get back to work while you wait for trial, or you need to have better contact with your lawyer during this time, being stuck in jail biding your time isn’t productive. Have your family or lawyer coordinate with Blackman Bail Bonds to discuss your bail bond options.

Consult your attorney, and give us a call to get your criminal situation cleaned up.