Can You Be Denied Medical Treatment in Jail?

Many people assume prison inmates have had all of their rights ripped away. While somewhat true, you still can’t be denied medical treatment in jail for a variety of reasons.

If you or a loved one doesn’t receive the care they deserve, continue reading. You may not be aware of all of your available options.

Can You Sue After Being Denied Medical Treatment in Jail?

Some argue that inmates receive better medical treatment than free citizens. That often isn’t the case, and many live without proper care. When prison staff can’t, or won’t, treat injuries correctly, it can lead to death. The federal constitution bans cruel and unusual treatment, so if this happens, you have a case.

The U.S. Supreme Court states that under the Eighth Amendment, inmates must receive medical treatments. If they have severe health concerns, it’s even more important to monitor them.

How Do I Prove I Was Denied Medical Treatment in Jail? 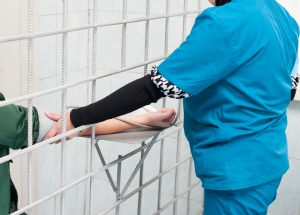 Under the law, you must prove that a staff member ignored a serious cry for help. When there is a blatant disregard for an inmate, it’s even worse.

Legally, “blatant disregard” means someone in a position of power deliberately ignored medical requests. However, you must also prove there is a “serious medical need” for them to act. Unfortunately, unless an issue is visible, many staff members may shrug it off. Often, you need a medical note or a physician to step in and state the problem.

How Can Staff Deny Medical Treatment to Inmates?

Before you or a loved one serves time, make sure their conditions are officially documented. Part of the planning process is getting prescriptions ready and documented for use. Many guards legitimately aren’t aware of when someone has existing conditions. If it wasn’t submitted into their file, they can likely argue that point.

Document in writing the full extent of their medical conditions and needs. That way, even if guards don’t know, they can be held responsible.

Do You Have to Have Wounds to Get Treatment?

Another misconception, thanks to Hollywood, is that you must be bleeding to get help. However, plenty of inmates have died because the jail wouldn’t give them insulin. Even minor health concerns can worsen from lack of treatment. Although an inmate’s file has been updated, staff don’t always review them.

In many cases, unseen problems can be harder to gain empathy from prison staff. Make sure you have documented every need an inmate has and frequently check on them.

Is Medical Care Better in Jail?

When you’re held after an arrest, you can still be denied medical care. That’s why it’s best to bail them out whenever you can. While you can’t bail someone out from prison, you can from jail. When you do get out, it offers you more time to prepare.

Contact us to learn more about using surety bonds to post your bail amount. Blackman Bail Bonds is your trusted name for local bail services.