Assault and battery are different offenses, but you can commit them at the same time. Keep reading to learn the difference between assault vs. battery.

A simple assault is a Class C misdemeanor and basically means an offense that is directed against property. It can include robbery, theft, burglary, disorderly conduct, and arson. A person commits assault when another feels the anxiety of being unsafe. If you commit simple assault, you can pay up to a $500 fine and spend 30 days in jail.

Aggravated assault is much more consequential and involves a number of factors. These can include committing assault with a firearm while wearing a mask or hood. It could also depend on where you committed the assault or the person you threatened.

An Example of Assault

Peter is walking down the street carrying a baseball bat. Joey is walking up the same street towards Peter. Peter has not been nice to Joey in the past, so Joey gets scared as Peter gets closer. As Peter walks by Joey, nothing happens, so Peter did not assault Joey.

If Peter yelled at Joey and held up his bat menacingly, that would be considered assault. Once there is an obvious threat from one person to another, that is an assault. If Joey felt reasonable fear from Peter’s actions, Peter has committed assault.

Battery is a Class A misdemeanor and means an offense directed against another person. This can include kidnapping, 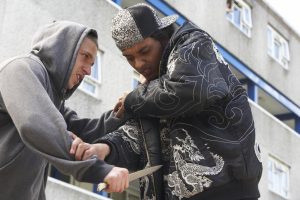 homicide, sex offenses, and bodily harm. Committing battery means you physically harm or make physical contact to provoke or insult someone. For the act to be criminal, you would need to cause harm knowingly and intentionally.

Intent is what battery requires. You can’t accidentally batter someone. If you intend to hurt someone, you have committed battery. Simple battery is a maximum $1000 fine and six months to one year in jail.

Aggravated battery occurs when someone causes great bodily harm or if it involves aggravating factors. Most factors that turn a simple assault into an aggravated one apply to battery as well. It might involve a weapon, a hood, or occur in a public place. An aggravated battery is a felony.

An Example of Battery

Jasmine is walking home at night when a man pulls her into an alley. He hits her in the face and tries to rip off her clothes. Jasmine fights back and gets away. She escaped, but that is still considered battery, because of his intent and his physical actions towards her.

What Happens if I’m Arrested with One of These Charges?

If you’re arrested for battery or assault, you have options. You’ll want to contact a bail bondsman like Blackman Bail Bonds. They can help you get out while you await your trial. Once you contact your lawyer, you can work on your defense.

You have the right to post bail and await your court date at home. If you do not pose a danger to yourself or others, you should receive bail. If you are considered a flight risk, the court may withhold bail.

If I’m Convicted of Assault or Battery, Can I Get My Record Deleted?

Assault vs. battery, what can be done? It’s possible to have your record expunged if you have no prior convictions. Having charges expunged means your record is physically destroyed, so no one can see it anymore. Court supervision doesn’t count as a conviction, so you could have those expunged.

If you or a loved one has been arrested, contact Blackman Bail Bonds. We can help you get out of jail while waiting for your trial. Our bail bond company services Harrisburg and surrounding counties, 24 hours a day, seven days a week. We can help you get what you need.