How Long Will My License Be Suspended For Not Paying A Ticket?

Everyone knows that scene in the movies where the driver opens the glove box, and citations spill out. If that were real life, some might ask: how long will my license be suspended for not paying a ticket?

In the Pennsylvania community, a traffic ticket is no laughing matter. You only have ten days to respond before they issue an arrest warrant. However, your troubles don’t always stop there. Different circumstances mean longer periods of not driving again, and you could possibly lose your license.

As Blackman Bail Bonds assists residents 24-hours a day, we’ve seen it all. Continue reading to learn more about license suspensions, and contact us for bail bond agents.

What Causes a Drive License Suspension?

Every state has its own traffic laws, as well as laws with regards to suspension. Generally speaking, you won’t really need to worry about your license being suspended until you really start racking up infraction points. 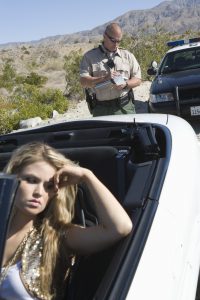 Traffic points refer to violations made while behind the wheel of your car. While there are only a few violations that only cause a single point infraction, most incur several at once. A speeding ticket, for example, may give a driver two points, while missing a stop sign is four. The points usually reflect the seriousness of the crime committed, and multiple charges can apply.

There is a list of possible traffic violations for drivers and their punishments. Some infractions that can quickly add up points are things such as:

How Long Will My License Be Suspended for Unpaid Traffic Tickets?

Here in Pennsylvania, it isn’t always about the monetary fine. Many citations will require you to complete traffic education within a specified period of time. If it’s your first time, you should have 30 days to pass the test. If not, there will be other hoops you’ll have to jump through.

The second time requires you to go to PennDOT’s traffic court. Failure to appear suspends your license immediately, and 15 days per the hearing officer. Three times or more means a full 30-day suspension pending a behind-the-wheel test. Again, you may remain suspended permanently if you don’t participate in the exam.

Other Suspension Durations for Your License

Referring back to traffic points, many drivers find their license suspended after accruing too many points. The more points that stack, the more severe the punishment. Once a driver hits 11 total points or more, suspension times can vary. Assuming there are no prior convictions, drivers receive five days suspension, per point.

A single suspension prior will lead to double the time, which is ten days per point. If you receive another one on your record, it will send that number of days to 15 days. Three or more suspensions means your license collects dust for an entire year. The best way to prevent a suspension from happening is clearing points as you earn them.

Can I Fight My Traffic Tickets?

The short answer is yes; you can contest a ticket in court. However, remember that time is of the essence and to follow instructions on your ticket quickly.

First, enter your plea before the due date on your ticket. That is usually ten days from the traffic citation being issued. Of course, this isn’t always as simple as it seems without a legal professional by your side. Why? It’s because when the officer shows up to court, it’s their word against yours before a judge.

Although expensive, and it’s admitting guilt, you may want to simply pay it. It saves you precious time that’s already not on your side during those 30 days.

I Got Arrested for Unpaid Traffic Tickets

Remember, you only have about 30 days to handle your suspension. When you simply ignore the problem, it doesn’t go away, and law enforcement finds you. When you’re arrested for traffic citations, contact us for bail bonds 24-hours a day. We serve more area facilities with around-the-clock agents.