Can you Request a Different Judge for Your Trial?

The thought of going to trial makes acid rise into your throat. Even worse, you suspect that the judge in your case can’t wait to send you to prison. Can you request a different judge for your trial? Read on for the answer.

The Role of the Trial Judge

You probably think that you know what the judge does in a criminal trial. After all, sensational criminal trials have become entertainment spectacles with every moment of the case covered on cable television. Still, you must understand the role of the trial judge if you’re considering trying to get a new one.

Essentially, the judge is supposed to be the unbiased leader of their courtroom. Their job is to rule on all legal questions and make sure that everything in the courtroom proceeds smoothly. Despite what it may seem like to most defendants, most judges are not in cahoots with the prosecution.

That said, there are sometimes strong reasons that you might want to switch your trial into another courtroom so that a different judge can preside over your case. Here is the scoop on changing judges during your criminal case.

When can you Request a Different Judge for Your Trial

Of course, it’s always possible that the judge overseeing your trial might decide to pass it off to another judge. However, since that’s not an especially common occurrence, let’s take a look at how you can go about getting a new judge.

The judge must step aside if a reasonable person would question whether the judge could be fair in your case. If the judge isn’t self-aware enough to realize the problem at the beginning of the case, your attorney will make a motion asking to replace the judge. By formally asking for a different judge, your defense attorney makes the issue part of the official record for a possible appeal.

Examples of valid reasons to replace your judge include: 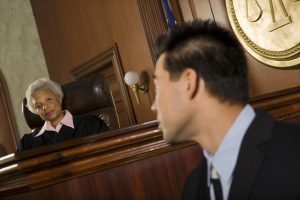 Your defense attorney will ask the court to change judges if they can find a legitimate reason to show that the current judge has a bias in the case.

Lastly, can you request a different judge for your trial? The judge is the one person in the courtroom who must stay unbiased and make decisions based on the law. Never hesitate to ask for a different judge if you feel that your judge isn’t fair.